This question was sent in by HSA Edge reader Charlie:

I have had an HSA for a number of years. This year, in February 2019, I opened a new HSA at a different institution and transferred the balance from my old account. Now, I’m wondering can I make a contribution to this new HSA for 2018? I didn’t contribute to the old, closed account for 2018.

The short answer is, “Yes”, you can contribute to the new HSA given your eligibility last year. It does not matter at which bank (or, “custodian”) you make your HSA contribution, just that you were an eligible individual for the year in question. Just make sure you flag it as a prior year contribution to account for it in 2018 as opposed to 2019.

The reason is the HSA laws are not concerned with where you deposit the funds. Instead, they calculate the amount you are allowed to contribute, your contribution limit, by year and leave it to the account holder to contribute them to the HSA of their choice. In fact you can contribute that amount to multiple HSA’s (e.g. at different banks) if you like. There isn’t a relation or enforcement between the HSA you had open during the eligible period and where you must contribute the funds.

I was covered under a high deductible plan but also by my parents’ plan. I didn’t realize my employer would be putting money in an HSA for me. I tried to request a distribution for ineligible contribution from my HSA but the HSA custodian wouldn’t release the money to me since my employer put it in. What are my options?

Excess Contributions made by your employer are included in your gross income.

By paying tax on them and keeping them in your HSA, this fulfills their original intent of the contribution being used for qualified medical expenses. The downside here is you have less flexibility on your post tax dollars (compared to if they were in your pocket), but it was free money to begin with.

You have HSA eligible coverage and opened a Health Savings Account, diligently making contributions throughout the year. You now have a nice nest egg to protect yourself from routine care, medical surprises, and emergencies. However, on whom you can spend your HSA funds can be confusing. We have previously discussed who can use your HSA funds but the issue of step children, or children of separated parents, is a special case. Sometimes, taxes and step children can be a tricky situation. In this article, we will discuss that step children can be the beneficiaries of your HSA funds.

The IRS Chimes In

The IRS generally lists 4 categories of people on whom you can spend your HSA contributions:

You will notice that step children are not mentioned in the common recipients here. But if you dig a little deeper into the IRS materials you will find a surprising answer. In a rare moment of foresight, the IRS directly addresses the case of step children issue in a follow up discussion of this rule. This appears in Form 969: 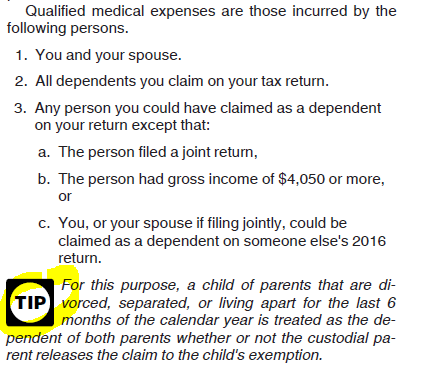 The IRS states that if the parents have been divorced or separated or living apart for the last 6 months of the calendar year, the child is considered a dependent for both parents. That child then falls into point 3 in the above list of HSA eligible expenses, so you can spend your HSA on them.

A child of parents that are divorced, separated, or living apart for the past 6 months of the calendar year is treated as the dependent of both parents.

However, it isn’t clear if this “6 months” applies only to the 3rd case (living apart) or all three cases (divorced and separated). All hail the Oxford comma! Why the IRS includes this confusing 6 months of calendar year test is beyond me, perhaps it is used as some basis to confirm the parents are actually living apart for good. So what if the parents separated in January-June versus later in the year, say September? Does the 6 months of a calendar year (July-December) have to be satisfied before the child is treated as a dependent? That just seems weird to me.

My interpretation (which has not been confirmed) is that the 6 months applies only to parents living apart. Thus, if you are divorced or separated, your HSA funds can be applied to your step children, regardless of who has custody of the children. Also note that this applies to your spouse’s children i.e. your stepchildren.

Let’s assume a situation where a mother and father with 1 child separate and remarry; here are some examples of who can spend HSA funds:

In addition, if the mother and father remarry and their respective spouse has children, they now have stepchildren of their own and can spend their HSA on them:

In sum, the HSA is flexible enough to allow for spending funds on stepchildren, if you can make your way past the IRS wording.

The online resource about Health Savings Accounts (HSA's) and using them to your maximum benefit. Also try EasyForm8889.com to quickly and easily file Form 8889 and TrackHSA.com to record your HSA purchases, reimbursements, and receipts.

Sign up and receive “10 Tips for your HSA” emailed now!

Does your workplace need to learn more about HSA's? Bring an expert (me) on site for a fun and engaging session to learn about HSA's!

Email us and we will find you an answer: